Understanding VC: #20 Chris Smith from Playfair Capital on his transition from law to venture capital, the 2Bs of an ideal pitch deck, and ways VCs can harm a startup

In the 20th episode of Understanding VC, we had a chat with Chris Smith, Partner at Playfair Capital, an early-stage venture capital fund based in London. This episode involves a discussion over several unusual events which lead Chris to where he is today. He also shares some of the most important things founders need to keep in mind in order to construct an impressive pitch deck, and the cautionary principles that they should follow while trying to find a VC which would fit their startup. Over the course of the conversation are also interspersed some insights on how Playfair Capital functions, and what exactly do they offer to their founders beyond the capital.

Chris started off as a lawyer solely due to the attractive payscale that US based firms had started offering in the UK around the time he had to go to university. And when the financial crisis of 2008 followed, Chris could not find a chance to do something that would actually interest him, and so he ended up spending a decade on law. Although he did not enjoy practising law as much, it was a portal through which he entered the world of venture capital while working as a lawyer in silicon valley for half a year. After leaving law, he also worked in an operational role for five years at a telecom company called Plan.com, which concretized his interest in startups.

Chris had had a knack for problem-solving since his college days. While in college, he set up a telecom business which provided cheap overseas calling services to students at a time when the foreign call rates were extremely high, an issue that he found to be a mutual experience for students in the US as well as the UK. His natural impulse was supplemented by the knowledge he acquired during his days in the silicon valley, and once he returned to London, he began to experiment with angel investing.

Over the course of ten years. Chris invested in over fifteen companies which led to building a decent track record while familiarizing him with the ins and outs of this industry. Then in the summer of 2018, one of his angel investments introduced him to the opportunity of becoming a partner at Playfair Capital. The process was a peculiar one because partners are hardly ever hired through interviews, but that’s exactly what happened with Chris. Subsequently, he went through a three months trial period which allowed both the parties to build trust and certainty regarding this association.

The trajectory of Chris’s journey has been rather curious, and we wanted to know whether the time he spent on law in the beginning was of any use to him once he switched professions. Chris says that being a lawyer has definitely supplemented his capability to deal with people on a daily basis, scout potential gems in the market and negotiate the right way. It has also made him adept at research which made his transition much smoother than most people.

On asking Chris about the important steps for fundraising, we found that doing a thorough research on potential investors was the first one amongst the three that he described. According to Chris, the second step is to start building relationships early-on in your career. This is crucial for expanding your network as an entrepreneur, identifying the people who would be interested in working with you, and the ones who you would be interested in working with. The final step is to optimize the formal aspect of the fundraising process. What can you do about that? Build a pitch deck which is to the point, clearly explains your idea, has a clear outline of the problem you are seeking to solve, and how your solution would be implemented. The worst impression that founders can leave on VCs is confusion regarding what exactly they want to make and why.

We went into the details of building an ideal pitch deck with regards to which Chris shared the 2Bs that he expects founders to follow: beauty, and brevity. Beauty is a no brainer; your pitch deck should look neat and should be able to catch the eye of those to whom you are pitching. Brevity is not entirely different from beauty, it is rather a structural extension of it which entails a clear and concise understanding of the problem and solution that your product focuses on. For founders, who are over-familiarized with their startup plan, assumed knowledge can often lead to an unclear pitch deck which could leave the VCs clueless about the objectives you are aiming to achieve. That’s where brevity is critical.

Another bonus tip from Chris: founders should approach multiple VCs at once, although not without rigorous research, leading to a competitive tension between VCs which is conducive to a successful fundraising round.

For us to understand founders’ best practices further, Chris provided us with an example: an investment which originated from a LinkedIn cold message. Chris received the cold message from the Edinburgh based Continuum Industries founder, Grzegorz Marecki but his cold message stood out amongst the horde of run-of-the-mill cold messages that VCs receive on a regular basis.

The message was crisp and clear; it stated the ideas that the founder had and why someone should invest in them without any beating around the bush. And it involved a call-to-action which invited the recipients to connect with him if they felt interested. Chris was sucked in right away and soon met the founder who displayed relentless persistence without which fundraising would be a painful task.

We discussed further about fundraising, the amount of truth in the popular notion that fundraising has become an easier process in present times, and how one should go about it. Chris said that easy fundraising is a myth. Of course there are times when startups acquire funding easily in early-stages, but the real game comes into play when they have to raise funds in subsequent rounds. For successful fundraising in the later rounds, a wisely chosen early-stage VC would go a long way. Especially one which focuses on supporting its portfolio companies in more ways than one.

Finding the best match for your startup again requires research but also testing the research in the market by talking to people who your potential VCs have worked with. Founders’ focus should never be hogged by the amount of capital a VC is offering. If it doesn’t have the bandwidth to help you out in the areas where you do need help, it’s just not for you. Money wouldn’t be able to solve problems that require expertise and support.

VCs have two customers, namely LPs and founders. The ratio of time investment in the two parties can vary drastically based on the VC’s priorities and responsibilities. At Playfair Capital, Chris tells us, since there is only one LP, they are able to contribute most of their time to supporting their portfolio companies, and ascertaining funding in the later rounds.

At this point, it becomes clear that just the way VCs choose startups to invest in, the startups also need to pick and choose VCs which would be compatible with them. Chris went on to explain a bit further how a wrong choice can affect the startup.

He categorises VCs into three types: good, bad, and ugly. The good VCs are, well, good for your startup. The bad ones are those who just invest capital with hopes of profit, otherwise indifferent to the operations of the company. The ones that Chris warns founders against are the ugly ones. Those are the VCs which prove detrimental to a company’s growth due to excessive interference, damaging terms aligned towards unfair financial advantage, and overall a toxic work culture.

Since Playfair Capital seems to be in the ‘good’ category, we asked Chris to talk a bit about the approach that they follow, and the kind of work culture they endorse. He tells us that currently they are functioning within a hybrid structure where the employees work online as well as offline, and it has been working well for Playfair. As to why they don’t prefer a completely remote structure, Chris said that although it is alluringly comfortable while also getting things done, over time the lack of human connection in remote operations is something that Playfair seeks to avoid. According to Chris, relationship building is one of the indispensable elements of this industry, and at Playfair, they promote it to the fullest.

Towards the end of the episode, we asked Chris’s views on the European and Southeast Asian startup ecosystem, and whether he thinks one is better than the other. Chris observes that Series A onwards, the European market becomes exceedingly competitive for VCs because there are just so many VCs in the market. So by extension, it is comparatively easier for the European founders to procure funding at later stages. On the other hand, the Southeast Asian market has relatively fewer VCs which makes early fundraising easier but subsequent stages more tedious due to low competition amongst the smaller number of VCs.

Being a VC himself, Chris bid us adieu with a final piece of advice for our listeners. He said that the best success stories start from seemingly ridiculous ideas. And it is important for emerging founders to compose their company of people who have faith in their idea, and who are ready to support their vision. And the same goes for VCs; they need to start looking beyond the conventional indicators of profit and excavate talent which could benefit the society at large, and help building a better future.

Understanding VC: #28 Yinglan Tan and Linh Dang on the ent…

Our 28th episode was the first in a series of experiments to diversify our podcast in terms of not just ethnicities but also ingenuity. In this episode, … 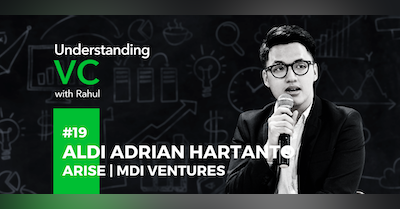 In our latest episode of Understanding VC, we talked to Aldi Adrian Hartanto, Partner at Arise, an early-stage VC fund in partnership with Telkom Indones…